skip to main | skip to sidebar

"Even if I knew tomorrow the world would go to pieces, I would still plant my apple tree."
--attributed to Martin Luther

I first worked at the Glimmerglass Festival in the summer of 1999.  I had become disillusioned with the place I had worked for the previous two summers and was looking for a new summer home where the workers were valued as an asset, not used as cheap labor.  I found that at Glimmerglass, and have stayed there for every season since.

I would have started my 22nd season last week.

My summer begins in December with hiring phone calls and seed orders.

I've returned to the same company housing for most of my time at Glimmerglass, and have been lucky enough to garden there for nearly twice as long as I have had a home to garden the rest of the year.  I solidified my commitment to Glimmerglass the day that I planted asparagus there.

And so, as I organize my seeds, place my orders, and plan my garden in the dead of winter, that planning always includes summer at Glimmerglass.  Springfield and Cooperstown have become a second home to me.  I have figuratively and literally put down roots there.

My ~10 week contract, starting right around our last frost date, favors plants that grow quickly from seed to maturity, and perennials that can take care of themselves for most of the year.  Below is a pot of a top-setting onion variety called "Egyptian walking onions" that I planted last fall.  They multiply by forming lots of small bulbs at the top of the greenery that drop down to the soil and "plant" themselves at a little distance from the mother plant.  Thus the "walking."  By bringing some of the top-sets indoors for the winter, I had a source of fresh scallions for cooking.  My plan was to then bring the pot to my summer housing (from here forward referred to as "the farmhouse") to plant now and let them multiply so I would have an onion supply that took care of itself and was ready to harvest from the day I arrived.

Instead, I've planted the potted ones into the patch here at home.  I'll try a new batch next year to plant at the farmhouse.  I was happy for the winter supply of scallions, but it's clear that by spring the potted ones aren't as vigorous as those that stayed outdoors.  I am curious to see whether they "catch up."

My other experiment for farmhouse growing this year was with peas.

Kevin Espiritu of Epic Gardening has grown climbing peas in a hanging basket to take advantage of his light situation--an area where there isn't enough light to grow veg at ground level,  but there is at eye level.

I borrowed his idea to take advantage of my seasonal situation.  I am home when it is time to plant peas, but at Glimmerglass when it is time to harvest and eat them.  I've tried starting seeds at home and transplanting them into the farmhouse garden, I've tried planting seed late at the farmhouse.  Neither was very successful.  So this year I planted at home, both in my garden and in a hanging basket for travel.  I've found an unexpected benefit...while something (probably deer) has eaten half of my garden pea plants, the basket is hanging out of reach and un-harmed.  Next spring I expect I'll be planting two baskets, one for my husband at home, and one to travel with me.

Like any good relationship, the plant exchange goes both ways.  I love having plants that carry memories of people and places dear to me.  I just transplanted asparagus from the bed my father planted 30 years ago to begin a patch at  home.  I've brought plants from home to Cooperstown, both to my housing and
to the two gardens I was given permission to plant around the Glimmerglass costume shop.  I've also brought plants home to have a piece of Glimmerglass to enjoy for the rest of the year.

Years ago we realized that there were iris leaves growing in a shade garden at the costume shop, but they had never flowered.  We transplanted them to the sunny side of the shop, and not only did they flower, but they have multiplied to the point where I had to thin them.  I spread the thinnings to other iris plantings around the Glimmerglass campus, and still had extras to give away and to bring home.  These pale purple iris bloom earlier than other colors.  They are always part of my first weeks at the Festival, but for now I am glad to enjoy them at home.

Back in December, I prepared for Glimmerglass.  Even as a summer season looked less and less likely, I continued to plant and plan and nurture for an unsure future.  It's how I live in the world.  Using the present moment to plant and tend food and flowers for the (never guaranteed) future makes sense to me.

I miss my Glimmerglass family.  I miss the challenges of high quality professional work.  I miss working with my team, and spending days off with my closest friends.  In my loss, I also have opportunity.  I will finally see what blooms in my own garden in June.  I can experiment with container plantings that need too much watering to abandon for 10 weeks.  I spend time with my husband every single day.

I can't visit my favorite summer places, but I can raise an Ommegang right here on my back porch, while I watch a father robin lead his fledgelings around the garden for the first time. 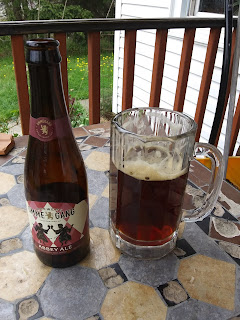 Next year in Coopertown, Glimmerglass family.

Knitting With Fire For You!

Podcasts Worth a Listen